Why Is Pay Lagging? Maybe Too Many Mergers in the Heartland

Matt Gies, a farm-equipment mechanic, repairing a tractor for a client in his shop at his farm in Berlin, Wis.

BERLIN, Wis. — For as long as he can remember, the only thing Matt Gies really wanted to do for a living was repair farm equipment.

But ever since he quit his job more than three years ago at a John Deere dealership — where he worked too hard for too little pay, he said — he has struggled to find a position in the same line of work.

One key reason for the difficulty is a wave of consolidation in the industry. Of the seven John Deere farm equipment dealerships within about an hour’s drive of his house, the one Mr. Gies left and refuses to work for, Riesterer & Schnell, owns four.

“It was just tough,” he said. “Everyone around here’s been bought out by Riesterer.”

Mr. Gies’s predicament is not uncommon in today’s job market. In the past few years, a growing chorus of economists has expressed concern that consolidation among companies, often considered a problem for consumers, may be limiting workers’ employment options and holding their wages down as a result.

And that, in turn, could help explain the wage stagnation that has become a vexing feature of the labor market since the late 1990s.

A recent working paper by the economists José Azar, Ioana Marinescu and Marshall I. Steinbaum examined job listings on CareerBuilder.com from 2010 through 2013 and found that tens of millions of Americans lived in areas where a relatively small number of employers posted most of the listings. They showed that wages fell when fewer employers in a geographic area listed most of the jobs in an occupation.

“There is definitely a strong rural urban pattern that I can see,” Mr. Steinbaum said. “Rural areas are likely to have a higher level of concentration — and, for any given unit of concentration, a larger effect” on wages.

Other economists, like Simcha Barkai of the London Business School, have reached similar conclusions. In a working paper released in 2016, Mr. Barkai found that over the past 30 years, workers’ cut of companies’ revenue had fallen most in industries where concentration had increased the most, though he said in an interview that he was not yet convinced this was the cause of weak wage growth.

Few workers epitomize the trend as much as agricultural-equipment mechanics, who faced the most concentrated group of prospective employers out of the roughly two dozen occupations that Mr. Azar, Ms. Marinescu and Mr. Steinbaum examined on CareerBuilder. On average, a single employer accounted for an overwhelming majority of job listings for farm-equipment mechanics in a so-called commuting zone in any given quarter. 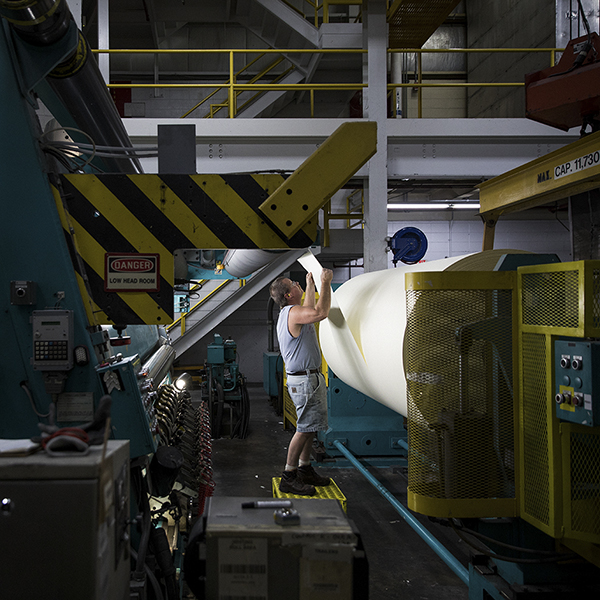 Neenah, in a county that flipped from blue to red, has lost factory jobs and its sense of prosperity. But local industries are concerned about a trade war.

Such findings probably wouldn’t surprise Robert Gray, who worked at a farm-equipment dealership for more than two decades before becoming a teacher in the agricultural-equipment technology program at Madison Area Technical College, which has a partnership with John Deere.

In the early 1980s, Mr. Gray said, several equipment manufacturers had a sizable presence in Wisconsin. But after a series of mergers and acquisitions, a huge portion of the new farm equipment for sale in the state today is made by Deere or two rivals.

Along with the drop in manufacturers came a decline in the number of separately owned dealerships, which employ mechanics like Mr. Gies.

“Volume discounts are geared more toward larger dealerships,” he said. “The larger the dealership, the more of a discount you get on equipment.”

Ken Golden, a John Deere spokesman, said, “Dealership consolidation has occurred as machinery has become more complex and customers have grown their businesses.”

According to the Bureau of Labor Statistics, the typical farm-equipment mechanic made about $18 an hour nationally in 2016. By contrast, the median wage for a mechanic who repairs construction and forestry equipment — similar machines painted different colors, according to Mr. Gray — is just under $24 per hour. The data collected by Mr. Azar, Ms. Marinescu and Mr. Steinbaum shows that there is substantially less concentration among employers listing openings for construction-equipment mechanics.

Pete Hoffman, a longtime farm equipment mechanic who teaches at Southwest Wisconsin Technical College, said there was another important factor in the disparity: Many mechanics in states like Wisconsin grow up on family farms and are keen to maintain their connection to agriculture. This could keep the supply of workers up and help hold wages down.

“They like to smell that good black earth, the fresh-cut hay,” Mr. Hoffman said. Working in farm equipment, he added, “you get more one-on-one time with customers — they become your friends.”

Mr. Gies, 30, who began tinkering with the equipment on his family’s farm in Berlin as a child, confessed to fitting this profile.

He started at Faivre Implement after graduating from Madison Area Technical College in 2008, and loved the job so much he stayed on after the Faivre family sold to Riesterer about four years later.

But at Riesterer, he said, his hours got substantially longer — he would leave home at 7 most mornings and often wouldn’t pull back into his driveway until 11 p.m. His pay stayed almost flat. And his bosses didn’t seem to care that he was running himself ragged.

At the old dealership, Mr. Gies said, he was part of the family. At Riesterer, “I was just a number, an employee.” (Riesterer did not respond to several requests for comment, but Matt Zellner, another recent graduate of Madison Area Technical College, said he enjoyed working for the company.)

Mr. Gies quit in 2015 to take a job as a mechanic at an energy company, then jumped to a local cable company last year. He has made significantly more money in both jobs than he did repairing farm equipment. But he hasn’t given up on what he considers his calling.

“I really liked what I did,” he said. “I really wish I still could be doing it.”

Unfortunately for Mr. Gies, there aren’t many John Deere dealerships besides Riesterer within commuting distance of his home. A second dealership chain, Mid-State Equipment, has a location in Columbus, about an hour away, but Mr. Gies said he was told it wasn’t hiring when he inquired. (A Mid-State human resources official said the company was always looking for good technicians.)

Other manufacturers have dealerships in the area that are also part of chains.

David R. Henderson, an economist at the conservative Hoover Institution, said the existence of additional options outside a worker’s current occupation or city made him skeptical that concentration was having an effect on wages. Skilled workers, he said, can seek out opportunities in other cities. Less-skilled workers can change occupations relatively easily.

“Because they’re unskilled, they fit in many kinds of jobs, and so you have more employers at the local level,” Mr. Henderson said.

Some manufacturing industries, like breakfast cereal and tobacco, are even more concentrated than farm equipment. But since many workers in those businesses are less skilled than farm-equipment mechanics, they may be more interchangeable with workers in other industries.

To the extent that less-urban areas have a problem, Mr. Henderson added, policymakers should make it easier for people to move to cities where there are more opportunities, perhaps by easing building restrictions that drive up housing prices. That suggestion was also raised in a report on employers’ market power by President Barack Obama’s Council of Economic Advisers.

But at least for workers who want to make a living in a certain kind of work without moving, consolidation may be an issue.

Mr. Gies spends his days at the cable company, and his nights doing freelance repair work on his family’s farm.

The freelance work is fulfilling, and the pay is good — Mr. Gies charges $65 per hour for labor and expected to make $3,000 to $4,000 replacing the engine of an enormous green tractor parked in his shop on a recent night.

But when asked why he didn’t go into business for himself full time, Mr. Gies demurred, alluding to the clubby nature of his field.

“I know a lot of guys that would come to me, but they don’t want to shy away from that relationship they have with the dealers around here,” he said. “The dealers I know of, they kind of hold grudges if you get on their bad side.”

Schultz 2020? Other C.E.O.s Will Be Watching Closely

Trump Picks Monetary Expert for No. 2 Job at Federal Reserve