President Trump entering a rally on Tuesday in Charleston, W.Va., where his promises to support the coal industry have been popular even though his administration predicts its continued decline.

Want climate news in your inbox? Sign up here for Climate Fwd:, our email newsletter.

Yet the reality on the ground for the nation’s coal industry remains bleak. Even the Trump administration’s own numbers suggest that its latest proposal won’t reverse the sharp decline of coal power, which has been crushed by competition from cheaper natural gas and renewable energy over the past decade.

More than 200 coal plants have shut down since 2010, and another 40 plants have announced they will close in the years ahead, with virtually no new coal plants being built today.

At best, if finalized, the E.P.A.’s newest rollback could help a small number of those endangered coal plants stave off retirement for a bit longer, albeit at the expense of increased air pollution. But even in that scenario, the agency’s own analysis showed, coal power would still decline by 20 percent between now and 2030 and coal mining would drop by one-third.

“This is like throwing a few snowballs into a blizzard,” said Tom Sanzillo, director of finance at the Institute for Energy Economics and Financial Analysis. “You might see a plant here or a plant there that benefits from the new rules. But we’re talking about very minor changes compared with the significant gap between the cost of coal and the cost of natural gas.”

The big picture: Coal is dying

The E.P.A. is planning to repeal the Obama administration’s Clean Power Plan, which was originally conceived as a sweeping climate change regulation that would push electric utilities to move away from coal and toward cleaner gas and renewables in order to cut carbon dioxide emissions.

In its place, the agency will propose a looser rule that merely encourages coal plants to make modest efficiency upgrades and allows states to regulate carbon dioxide emissions from power plants lightly, if at all.

On paper, that’s a drastic revision. But the truth is that utilities had already been shifting away from coal anyway, finding cleaner gas, wind and solar to be more attractive investments. The Clean Power Plan, which was fiercely opposed by industry groups when it was proposed in 2014 and never took effect, was quickly being outpaced by market forces. 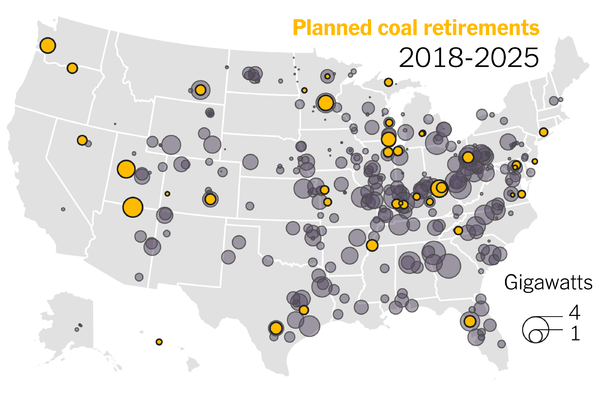 Trump Wants to Bail Out Coal and Nuclear Power. Here’s Why That Will Be Hard.

Over the past decade, coal has been pushed off the power grid by competition from cheap natural gas, state efforts to boost renewable energy and stricter pollution rules.

The Trump administration’s numbers bear this out. In its analysis of the new proposal, the E.P.A. estimated that the total amount of electricity produced by America’s coal plants would decline about 23 percent below today’s levels by 2030 without any climate regulations at all.

If the Clean Power Plan had taken effect, coal generation would have dropped somewhat more: 29 percent below today’s levels.

And if the Trump administration’s proposal is finalized? Coal-fired electricity will still decline by roughly 20 percent by 2030, the E.P.A. predicted. The total amount of coal mined for electricity would drop by one-third, compared with levels that are already the lowest in decades.

Consider the case of Ohio-based American Electric Power, one of the nation’s largest utilities, which opposed the Clean Power Plan, calling it onerous. The company is nonetheless planning to sharply reduce its reliance on coal, from half its energy mix down to one-third in the next decade, while investing heavily in wind and solar.

“I think this new rule will have a relatively small impact on what we see as our business strategy going forward,” said John McManus, senior vice president of environmental services at A.E.P. He noted that the company aimed to cut emissions another 16 percent by 2030 and was planning for the possibility that Congress might eventually enact stronger climate policies, such as a carbon tax.

“We don’t expect the climate issue to go away, so we do want to plan for a range of possible futures beyond this particular plan,” he added, referring to the E.P.A.’s latest proposal.

A second life for some plants

The Trump administration’s new proposal could, however, offer a reprieve for some individual coal plants around the country.

The majority of the nation’s coal-fired power plants are at least 40 years old, and many utilities are currently faced with the choice of paying for upgrades to keep them running or shutting them down.

Under an existing E.P.A. program known as New Source Review, plant owners typically have to install state-of-the-art pollution controls if they significantly upgrade those plants. That acts as a deterrent for keeping those plants open, especially if, say, building a new gas plant might be cheaper.

The Trump administration proposal, for its part, would exempt coal plants from New Source Review if they invest in efficiency improvements under the rule. That could shift the calculus and convince some plant owners to keep their coal plants open longer, especially in states like Kentucky or Wyoming, where there is somewhat less competition from natural gas.

“I wouldn’t expect a large number of plants to do this,” said Travis Kavulla, the vice chairman of the Montana Public Service Commission. “But you could see this dynamic in regulated electricity markets, where utilities can recover their costs from ratepayers and regulators might be reluctant to close down plants early.”

These more efficient coal plants could, in theory, expand their market share. But since coal is the most polluting form of electricity, that would come at a cost: The E.P.A.’s analysis suggests that the resulting increase in particulate pollution, which is linked to heart and lung disease, could cause hundreds of additional premature deaths if the rule keeps more coal plants open.

Still, it is unclear how many plants will pursue this course. Mr. McManus said that A.E.P., which operates in 11 states, may consider upgrading some of its coal plants, but much will depend on whether the rule survives legal review — environmentalists are certain to challenge the revisions to New Source Review in court — and what types of plans states decide to craft.

A bigger bailout ahead?

“These changes to environmental rules are necessary but insufficient,” said Michelle Bloodworth, president of the American Coalition for Clean Coal Electricity, who estimated that roughly 10 percent of the nation’s coal fleet is still on track to retire in the next three years.

One possibility? The Department of Energy is considering a plan that would force grid operators to buy electricity from struggling coal plants (as well as nuclear plants) in order to keep them afloat, using emergency powers normally reserved for exceptional crises like natural disasters.

That rumored move has already drawn criticism from other energy companies, which have called the proposal “legally indefensible” and argue that it would force consumers to pay billions more for electricity. Yet Mr. Trump has urged Energy Secretary Rick Perry to do everything he can to stop plant closings.

A Hot, Dry Winter in California. Could It Be Drought Again?

A Science Denier at the Natural History Museum? Scientists Rebel

Climate Change Is Driving People From Home. So Why Don’t They Count as Refugees?