President Trump has called the accord a “disaster” and vowed during the 2016 presidential campaign to kill it.

WASHINGTON — President Trump is expected to announce on Tuesday that he is withdrawing the United States from the Iran nuclear deal, European diplomats said after concluding that they had failed to convince him that reneging on America’s commitment to the pact could cast the West into new confrontation with Tehran.

If the diplomats are correct, the announcement will be the most consequential national security decision of Mr. Trump’s 15 months in office — though it could be eclipsed in coming weeks by his direct negotiation with North Korea’s leader over surrendering its nuclear arsenal.

One senior European diplomat who has been deeply involved in trying to persuade Mr. Trump to stay in the deal told reporters on Monday the chance that the president would keep the agreement intact was “very small.”

At the heart of the deal to limit Iran’s nuclear program, which was reached in July 2015 after more than two and a half years of negotiation, lay a bold trade.

The West would end three decades of sanctions and isolation of Tehran that had crippled the country’s economy and fueled domestic impatience with its clerical leaders. In return, Iran agreed to ship roughly 97 percent of its nuclear fuel out of the country, and forgo production of nuclear fuel, even for ostensibly peaceful purposes.

The negotiation with Iran was the signature foreign policy achievement of the Obama administration, and throughout the 2016 campaign Mr. Trump called it a “disaster” and “insane.”

But for more than a year, he was reluctantly persuaded by advisers that it was better than any alternative, and that the United States had no Plan B if it was the first to breach the arrangements. Those advisers — Rex W. Tillerson and Lt. Gen. H. R. McMaster — were ousted in recent months and replaced with two of the Iran agreement’s most vociferous critics, Secretary of State Mike Pompeo and John R. Bolton, the national security adviser.

In the 28 months since the arrangement went into effect, international inspectors have said they have found no violations — apart from minor infractions that were quickly rectified. 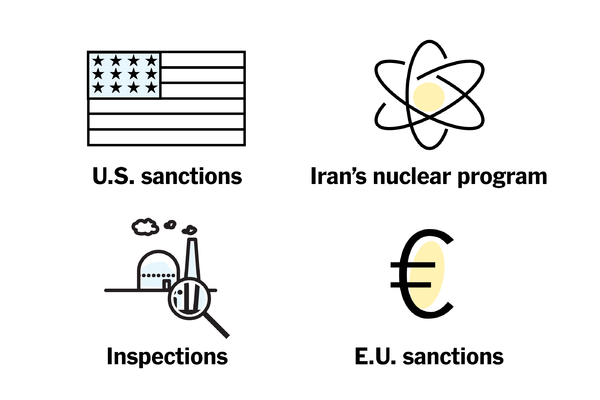 What Changes and What Remains in the Iran Nuclear Deal

The restrictions on Iran’s nuclear program under the deal could survive.

Under the deal, the restrictions on research and development in Iran’s nuclear program would begin to lift after a decade. After 15 years, Iran would be able to produce as much fuel as it wanted — though never for the purpose of making weapons.

Mr. Trump has insisted that “sunset clause” simply put off the day when Iran would become a nuclear-armed state. The agreement, he has said, failed to address Tehran’s growing missile capability and expanding influence in the Middle East — all funded, he insisted, from cash that was returned to the Iranians as a part of the deal, as well as its resumed oil trade.

The senior European diplomat, who spoke on the condition of anonymity when meeting with a group of reporters on Monday, called it “pretty obvious” that Mr. Trump would no longer waive American sanctions against Iran, as he has done since the start of his presidency to uphold the deal.

Rather than push the issues off for another decade, Mr. Trump is betting he can force Iran into a new negotiation.

It is unclear whether the president might mollify three major allies — Britain, France and Germany — by allowing them to maintain economic relations with Tehran without penalizing any of their firms. But European officials said that was not clear.

Mr. Trump issued two tweets on Monday about the coming decision. The first berated John Kerry, the former secretary of state, for his “possibly illegal Shadow Diplomacy on the very badly negotiated Iran deal.” It was an apparent reference to Mr. Kerry’s calls to leaders around the world looking for ways to save an accord that he dedicated much of his term to negotiating during the Obama administration.

A few hours later, Mr. Trump turned to Twitter again to declare that he would be announcing his decision at 2 p.m. Tuesday at the White House.

However the White House engineers the specifics of the announcement, diplomats say they are now adjusting to a new reality in which the fundamental trade with Iran is dead.

“It can’t be saved,” said Aaron David Miller, a longtime former diplomat now at the Wilson International Center for Scholars. “Whatever Trump decides, it’s the beginning of the end of the accord, either death by one, or 1,000, cuts.”

Over the past three weeks, senior officials from France, Britain and Germany flew to Washington to make a case that ditching the accord was a diplomatic mistake. On Sunday, Boris Johnson, the British foreign secretary, was the last to make those arguments, writing in The New York Times that “now that these handcuffs are in place, I see no possible advantage in casting them aside.”

By the middle of Monday, his visit seemed a last gasp: He was told that the decision was all but preordained, officials said.

President Emmanuel Macron of France and Chancellor Angela Merkel of Germany similarly argued that the Iran accord was flawed but could be built upon. The allies had suggested that the West could impose new sanctions against Iran’s ballistic missile development and armed support for the Syrian regime, for Hezbollah, for Hamas and Islamic Jihad in the Palestinian territories — but keep the nuclear deal intact.

“My view — I don’t know what your president will decide — is that he will get rid of this deal on his own, for domestic reasons,” Mr. Macron told a group of reporters in Washington during his visit last month.

But it has been difficult for Europeans to answer Mr. Trump’s demands because it is clear that Iran will not agree to reopening the terms of the accord itself. And if it were to be reopened, Iran had a series of demands of its own.

Should Mr. Trump withdraw from the accord, Iran could accurately claim that Washington was the first to violate it — a propaganda win. And Iran would be free, if it chose, to resume fuel production, according to diplomats who spoke on the condition of anonymity to discuss the sensitive negotiations.

The mantra of the European negotiators toiling to retain the nuclear deal has been “to fix it, not nix it.” But Mr. Trump has come at the problem from a different perspective: He argues that the only solution is a clean slate.

Mr. Trump has told visitors he believes that once the current agreement is destroyed, Iran will come to the table to negotiate a new one. Iran’s foreign minister, Mohammad Javad Zarif, who negotiated the initial accord with Mr. Kerry for more than two years, has said Tehran will not participate in such negotiations since it already spent years doing so.

The narrow decision Mr. Trump will have to announce on Tuesday is whether he is willing to once again waive American sanctions on Iran, holding up America’s commitments under the deal.

Yet even if Mr. Trump reimposes those sanctions, Europeans note that there are some delays built into the accord — a reconciliation period of about a month, and delays of 120 to 180 days before renewed American sanctions bite.

In a world of Trump brinkmanship, all that could allow time for further negotiations.

Iran can go to the brink as well, however, and anticipating its response is difficult. Hard-liners are already arguing to resume uranium enrichment and plutonium production. But it is entirely possible Iran will choose to abide by the deal for now, to make sharper the split between the United States and its European allies.

That may not be sustainable, European officials said. Over time, pressure will grow inside Iran to leave, since many there believe the sanctions relief has not led to the kind of national economic revival that the country’s public was told to expect.

Iran’s leaders have been cryptic about its potential response.

“If America leaves the nuclear deal, this will entail historic regret for it,” President Hassan Rouhani of Iran said in a speech broadcast live on state television in recent days.

“If we can get what we want from a deal without America, then Iran will continue to remain committed to the deal,” Mr. Rouhani said.

The Europeans are also worried that abandoning the deal will embolden Israel in its own struggle with Iran in Syria and Lebanon. That could lead to another bloody war, as Iranian troops and proxies move closer to the occupied Golan Heights and Tehran continues to ship missiles into Syria and southern Lebanon.

Oddly, while Prime Minister Benjamin Netanyahu of Israel has led the charge to persuade Mr. Trump to abandon the deal, his top military advisers have dissented. The commander of the Israeli Defense Forces, Gadi Eizenkot, has repeatedly said that the agreement “is working” and delaying Iran’s efforts to obtain a weapon by a decade to 15 years. Former military officials have largely agreed.

But Mr. Trump’s base of supporters has insisted that the deal essentially sold out long-range American interests. After hesitating, Mr. Trump appears to have decided to make good on his past promises.