Democratic and Republican senators in the Common Sense Coalition held a news conference ahead of a Senate vote on their immigration proposal on Thursday.

WASHINGTON — The Senate summarily blocked three measures on Thursday — including one backed by President Trump — to resolve the fate of the so-called Dreamers, leaving hundreds of thousands of them facing an uncertain future.

As senators struck down measure after measure, a week that began with the promise of a rare open, free-ranging debate on the issue crashed headlong into the same divisions that have prevented Congress from fixing the nation’s immigration system for decades. The lack of consensus left in question whether any solution on the Dreamers can be reached.

In a rebuke to the president, senators voted overwhelmingly, 39 to 60, against the White House-backed bill, which would have committed $25 billion for a wall along the border with Mexico, placed strict limits on legal immigration, ended the diversity visa lottery and offered 1.8 million Dreamers an eventual path to citizenship.

Senators were 21 votes short of the 60 required to open debate, and the rejection of the president’s plan was bipartisan: Democrats refused its get-tough approach to legal immigration, while many conservative Republicans derided it as amnesty.

Before the vote on Mr. Trump’s plan, senators rejected two bipartisan measures, including one written by Senators John McCain, Republican of Arizona, and Chris Coons, Democrat of Delaware, and another drafted by a broad bipartisan group of centrists calling themselves the Common Sense Coalition.

The votes were a stark reminder that Congress remains paralyzed by the immigration issue. Former Presidents Barack Obama and George W. Bush both tried to overhaul the system, but were stymied by lawmakers frozen into inaction, in part because of powerful interests on both sides.

What will happen now is unclear. An estimated 690,000 young undocumented immigrants have been protected from deportation by an Obama-era program, Deferred Action for Childhood Arrivals, or DACA. Another 1.1 million would be eligible.

But Mr. Trump has rescinded the program, which offers temporary, renewable work permits. It expires March 5.

The White House had worked vigorously to oppose the centrist bill, which the Department of Homeland Security labeled “a mass amnesty for over 10 million illegal aliens.” Senators of both parties said afterward that the Trump administration was instrumental in its defeat.

“I don’t think the president helped very much, but the bottom line is the demagogues won again on the left and the right,” said Senator Lindsey Graham, Republican of South Carolina and a key sponsor of the Senate measure.

Some Dreamers, many of whom have known no country other than the United States, are hopeful that the judicial system will protect them. Two federal courts have issued injunctions ordering the Trump administration to keep DACA in place for those already receiving its protections, but the Justice Department has asked the Supreme Court to intervene and overturn lower court rulings.

Thursday’s votes came after Senator Mitch McConnell, Republican of Kentucky and the majority leader, had set aside this week for senators to try to write a bill from scratch. Some senators said it was possible that lawmakers would attach an immigration bill to a catchall spending measure that must pass by March 23, when funding for the federal government expires.

Senator John Cornyn, the No. 2 Republican in the Senate, said he did not envision Mr. McConnell allowing more time for lawmakers to debate the issue.

“I don’t see it,” Mr. Cornyn said. “If we couldn’t get it together this week, I mean, we’ve got other things we have to do, which are pressing.”

In the run-up to the debate, the bipartisan Common Sense Coalition measure, sponsored by seven Democrats, eight Republicans and one independent, was thought to have the best chance to clear the 60-vote threshold needed to pass the Senate.

It would have appropriated $25 billion for border security, including construction of the president’s proposed wall, over a 10-year period — but not immediately, as Mr. Trump demands.

It also included an eventual path to citizenship, over 10 to 12 years, for 1.8 million of the young undocumented immigrants, but would have precluded them from sponsoring their parents to become citizens. And it did not make changes to the diversity visa lottery system, which Mr. Trump wants to end.

The White House attacked the plan as a grievous threat to national security and asserted that its sponsors were either complicit in wanting to undermine the United States’ immigration laws or misinformed about the drastic effects that the proposal would have.

In a conference call with reporters before voting began, a senior White House official lashed out at Mr. Graham. Speaking only on the condition of anonymity despite repeated requests to be on the record, the official accused Mr. Graham of attacking homeland security officials and standing in the way of needed immigration changes. 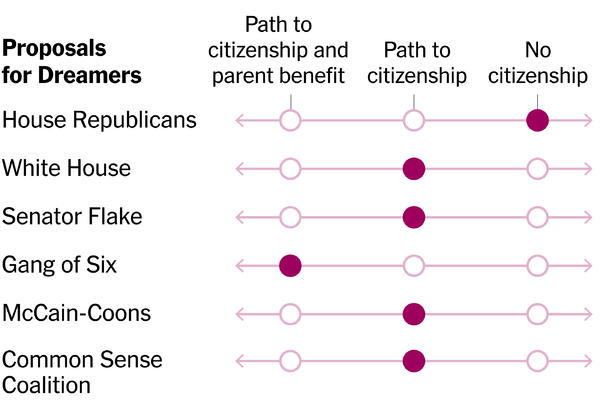 Dreamers’ Fate Is Now Tied to Border Wall and Other G.O.P. Immigration Demands

Lawmakers are working to extend legal protections for undocumented immigrants who were brought to the United States as children, but the discussion is complicated by other issues on the table.

“Senator Graham has been an obstacle for those reforms,” the official said.

The official accused Mr. Graham of misleading other senators, including Democrats, about the damage the proposal would do, and said that Democrats should not let “Lindsey Graham dictate what Democrat senators ought to do.”

On Capitol Hill, Mr. Graham took aim at Stephen Miller, a top White House aide and an immigration hard-liner. “As long as the president allows Steve Miller and others to run the show down there, we’re never going to get anywhere,” he said.

After the legislative failures in the Senate, top White House officials said they plan to turn their attention to the House, where Republicans are working on a similar hard-line immigration plan that Mr. Trump has also embraced.

Republicans may have more success approving the bill in the House, where they control the chamber and need only a simple majority to pass legislation. Mr. Trump praised the House legislation on Thursday, saying that it “enshrines” his immigration principles.

In the meantime, advocates estimate that more than 100 of the young immigrants lose their protected status each day. On March 5, they say, the number could rise to as many as 1,400 a day.

And while the president has said repeatedly that he wants to protect the Dreamers — at one point he called on Congress to pass a bipartisan “bill of love” — many blame him for refusing to accept the bipartisan deal.

“The president is not negotiating in good faith,” said Juan Escalante, 28, who was born in Venezuela and now works for America’s Voice, an immigrant rights group. “If you ask me, as an impacted party who essentially has everything to lose — my driver’s license and my work permit and my livelihood in this country — that is not any way to negotiate a deal.”

White House officials are betting that House passage of a bill to protect the Dreamers will put enormous pressure on Democrats in the Senate. But immigrant rights activists and Democrats — and some Republicans in the Senate — have repeatedly vowed to oppose the House legislation, which they call outrageous and hurtful.

That could leave the issue mired in stalemate as neither chamber can embrace legislation that the other chamber is willing to pass.

“No one comes out a winner in this,” a dejected-sounding Senator Joe Manchin III, Democrat of West Virginia and a chairman of the Common Sense Coalition, said after the Senate vote. “We tried everything.”

‘It Has to Be Perfect’: Putting Out a Yearbook After the Parkland Shooting