Ryan Found Himself on the Margins as G.O.P. Embraces Trump

Mr. Ryan said Wednesday that he would not seek re-election, ending a brief stint atop the House and signaling the peril that the Republican majority faces in the midterm elections.

WASHINGTON — Paul D. Ryan took the helm of the House two and a half years ago, not because he wanted it, but because he was seen as the only lawmaker who could keep Republicans from devouring themselves. They had shut down the government, nearly precipitated a debt crisis and toppled a speaker, John A. Boehner.

Mr. Ryan announced his departure on Wednesday with the gaps in the party as evident as ever, but drawn along new fault lines, with nativists and populists following the lead of President Trump, pitted against what remains of Mr. Ryan’s brand of traditional conservatism.

The speaker, who once dreamed of a more inclusive party, open to black, Latino and immigrant voters enticed by a youthful, optimistic vision, was being left behind.

“I think he’s tired,” said Newt Gingrich, who was driven from his own speakership in 1998. “It’s a combination of dealing with 240 House Republicans, the United States Senate and President Trump. That trio was about enough.”

Mr. Ryan became the youngest speaker in more than 100 years when he took the job in 2015, and he has managed to maintain an uneasy peace within his fractious conference, an achievement unto itself. He will leave Congress in January satisfied that he fulfilled a career-long dream: passage of a sweeping overhaul of the nation’s tax laws.

But that tax overhaul was supposed to be part of a larger vision of smaller government, more free enterprise and international trade, balanced budgets and partly privatized entitlement programs. That grander vision has gone nowhere.

Instead, Mr. Ryan, a proud fiscal conservative, is leaving behind ballooning deficits that will reach $1 trillion by 2020, even with solid economic growth. The Affordable Care Act is intact. Medicare and Social Security have not been touched. Military and domestic programs just received large funding increases under a budget deal that Mr. Ryan helped negotiate.

Though he was once considered one of the Republican Party’s brightest stars — he ran for vice president as Mitt Romney’s running mate in 2012 — Mr. Ryan said Wednesday that at 48, he is out of politics for the foreseeable future.

“No plans to run for anything,” he said in an interview with CNN. “And I really don’t think I’ll change my mind.”

Mr. Ryan’s decision to give up the speakership is an unusual one; most speakers do not give up power voluntarily. In announcing that he would retire at the end of his term, he cited a desire to be more than “a weekend dad” to his three teenage children, and insisted that he would be “leaving this majority in good hands with what I believe is a very bright future.”

But his move, which will undoubtedly make life harder for his Republican colleagues seeking re-election, prompted instant speculation that there were deeper, unstated reasons. For the past year, Mr. Ryan has navigated a very delicate relationship with the president, after working hard to distance himself from Mr. Trump during his 2016 campaign.

An ardent free trade advocate, Mr. Ryan could only watch as Mr. Trump pulled the United States out of the Trans-Pacific Partnership, a massive trade deal that the speaker had supported, and as he moved to impose tariffs on steel, aluminum and goods from China. A lifelong advocate of relaxed immigration laws, Mr. Ryan did little to stop the hard-liners who backed Mr. Trump’s crackdowns and pushed for his wall on the southern border with Mexico. An advocate for federal law enforcement, he was bulldozed by those in his conference eager to attack the F.B.I. and Justice Department at the president’s behest.

“We can all read between the lines,” said Representative Charlie Dent, a moderate Republican from Pennsylvania, who is also retiring. “This is not an easy administration to be dealing with.”

Once described as “the intellectual center of Republicans in the House,” Mr. Ryan has styled himself as a master of policy, someone who understood the arcane details of budgeting, the tax code and health care. He came in as a reluctant speaker, drafted by his colleagues to replace Mr. Boehner, who in fall 2015 quit rather than fight a conservative rebellion.

Mr. Ryan insisted when he took the job that he was going to spend weekends at home with his family in Janesville, Wis. “I don’t want to be speaker,” he said shortly after Mr. Boehner announced his decision to step down. “This is a good job for an empty-nester.”

A full list of elections for the House and Senate, including which races matter most for congressional control.

By that time, Mr. Ryan had carved out a niche as a rare creature in the House: someone who was admired in most conservative circles, and who had the respect of nearly everyone in his conference. He also presented himself as a younger and more modern face of the Republican Party. (Publicity around his exercise routine, the grueling P90X workout, helped with that.)

Colleagues do say he helped broaden the party’s appeal.

“Politically, I think he’s been a tremendous image for us,” said Representative Tom Cole, Republican of Oklahoma. “There’s not a more wholesome person on the planet than Paul Ryan.”

Lanhee J. Chen, a research fellow at the Hoover Institution, who was the policy director for the Romney campaign in 2012, described Mr. Ryan as the rare congressional leader who “could claim to be both a political leader as well as a thought leader.”

But governing has proved a challenge, on one issue after another, and he has wielded power with a light hand.

“I think he is idealistic, and I think he’s learned a lot from being speaker,” said John Feehery, a Republican strategist who was a top aide to one of Mr. Ryan’s predecessors, J. Dennis Hastert. “He’s been in a hot seat. And when you’re in the hot seat, you recognize that your ideals don’t always live up to the reality that we live in.” 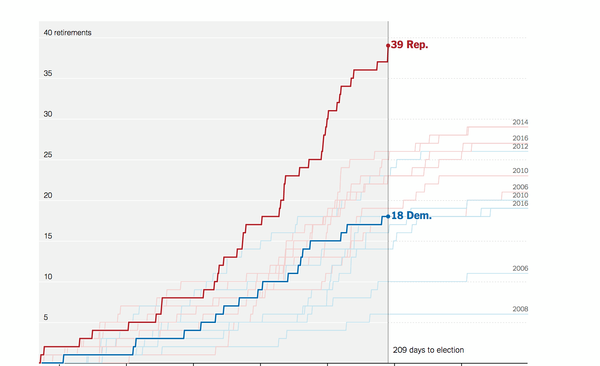 The exodus of G.O.P. House members has lifted the Democrats’ hopes of regaining the majority.

Adam Brandon, the president of FreedomWorks, a conservative group, gave a mixed review of Mr. Ryan’s tenure as speaker, crediting him for shepherding through the rewrite of the tax code, but faulting his strategy for trying to repeal the Affordable Care Act.

“He can go home and be proud of the work he did,” Mr. Brandon said. But at the end of the day, he said, “the base is expecting a lot more.”

Mr. Ryan’s personal story is well known: His father died when he was 16, forcing him to grow up fast. He took a job at McDonald’s and became class speaker in the same year, experiences that helped shape his belief in individual responsibility and his conservative outlook.

He took a job as a legislative analyst in Washington after college and found a mentor in Jack Kemp, the former congressman who in 1996 ran on the Republican ticket for vice president. In 1998, at 28, he was elected to Congress, where he quickly became known as a good listener and a master of policy details — two traits that became a hallmark of his tenure, as a chairman of the Budget and Ways and Means Committees, and later as speaker.

He was also viewed as a straight shooter and as someone who could work across the aisle with Democrats, as he did in 2013, when as Budget Committee chairman he reached a budget deal with his Senate counterpart, Senator Patty Murray, Democrat of Washington.

On Wednesday, Mr. Ryan hosted some of his most trusted lieutenants in the House for lunch, as a way of thanking them and saying goodbye. Those who attended said he spoke very movingly of his family, talking about the death of his father and his desire to spend more time with his own children.

Mr. Cole, for one, said he took Mr. Ryan at his word, adding, “You don’t have a lot of speakers surrendering power and walking away.”

North Korea Dropped Out of Meeting With Pence at Last Minute, U.S. Says