Rick Gates outside court in February. Mr. Gates began testifying against Paul Manafort, his mentor and former boss, on Monday.

Updated Aug. 7, 2018: Rick Gates is on the stand for a second day to testify against Paul Manafort. Follow our live briefing for the latest developments.

ALEXANDRIA, Va. — Rick Gates was just an intern when he first crossed paths with Paul Manafort.

Years later Mr. Gates went to work for him, rising to become right hand man to Mr. Manafort, once a powerful force in Republican politics who more recently had turned his sights to lucrative opportunities abroad.

On Monday, Mr. Gates was Mr. Manafort’s ultimate nemesis, the prosecution’s star witness in Mr. Manafort’s trial on tax and bank fraud charges stemming from work they did together for pro-Russia political forces in Ukraine.

At a time when the investigation into President Trump and Russian involvement in the 2016 campaign has left Washington in a state of constant drama, it was a moment of particular pathos. There was the protégé, having turned against his mentor and agreed to a plea deal, starting to give his account of how the two of them laundered their income. A few feet away was his former boss, flanked by five lawyers waiting to shred Mr. Gates’s character.

Mr. Gates, somber-faced on the witness stand, never glanced at Mr. Manafort, who glared in his direction. Asked by prosecutors whether he was involved in any criminal activity with Mr. Manafort, Mr. Gates responded, “Yes.”

He acknowledged his own extensive wrongdoing. Then, speaking rapidly, he testified that he knew about what the prosecutors allege is a multiyear tax and bank fraud scheme by Mr. Manafort because “I was the one who helped organize the paperwork.”

Mr. Manafort controlled secret foreign bank accounts in the names of 15 shell companies, he said. He helped conceal them, he testified, “at Mr. Manafort’s direction.”

The case is being closely watched as the first test of the ability of the special counsel, Robert S. Mueller III, to win a courtroom conviction, and because both Mr. Manafort and Mr. Gates held top posts on Mr. Trump’s 2016 campaign. Its outcome may well depend on what the jury makes of Mr. Gates, who continued to be associated with the campaign — and later, was named deputy chairman of Mr. Trump’s inaugural committee — after Mr. Manafort was forced off the campaign amid a swirl of reports about the nature of his work in Ukraine.

Mr. Gates’s dozen years of work at Mr. Manafort’s side makes him a perfectly positioned witness. He seemingly knew every detail of Mr. Manafort’s finances, down to how much he paid for season tickets to the games of his favorite teams: the Yankees, the Knicks and the Redskins.

But he testified Monday that he was also guilty of a host of crimes, some of which had nothing to do with Mr. Manafort. Prosecutors forced him to run through the laundry list for the jury: tax fraud, bank fraud, money laundering, lying in a deposition and lying to federal authorities.

Mr. Gates also acknowledged on the stand that he had inflated expense reports, an admission sure to be cast by the defense as him stealing from Mr. Manafort.

His testimony, which he gave after 20-some meetings with prosecutors, backed up the key elements of the prosecution’s case.

He said four Ukrainian oligarchs, immensely powerful figures who, with Mr. Manafort’s help, managed to help elect a Russia-aligned president in 2010, paid Mr. Manafort millions through their own shell companies in Ukraine. He said Mr. Manafort knew that he was legally required to report his foreign bank accounts but did not because he wanted to report less income and lower his taxes.

Mr. Manafort’s allies argue that Mr. Gates can be discredited as a morally bankrupt and untrustworthy narrator who owes his professional career to Mr. Manafort, yet siphoned millions from his accounts. Then, faced with the prospect of prison and huge fines, Mr. Manafort’s allies say, he blamed Mr. Manafort for financial machinations that he himself executed. The defense also signaled Monday that it may allege extramarital affairs by Mr. Gates in a further attempt to attack a man who Mr. Manafort’s friends say took advantage of his boss.

“Rick Gates owes everything to Paul. Paul made Rick a lot of money,” said Hector Hoyos, a longtime friend and former business partner of Mr. Manafort’s who remained in contact with him after his indictment. “But Rick is not the strong-valued guy that Paul is. Rick will go wherever the wind takes him, and it just goes to show you that there is no such thing as loyalty and friendship anymore,” Mr. Hoyos said in June, stressing that he has not done any business deals with Mr. Manafort in years and has not spoken to him in months.

When first facing prosecution by Mr. Mueller, it seemed Mr. Gates would stick by Mr. Manafort. On the October morning that they were indicted, Mr. Gates sent an email to friends and family defending Mr. Manafort against what he called an “unfair” and “distorted” narrative created by the news media, and suggesting the investigation that led to their arrest was politically motivated.

When Mr. Gates subsequently pleaded guilty and agreed to cooperate, Mr. Manafort ripped his former protégé as a “traitor” in private conversations with associates, they said.

The men spent countless hours together traveling the world, and by all accounts got along quite well. But in some ways they are a study in contrasts. Prosecutors have detailed the lavish lifestyle on which Mr. Manafort spent his riches, while Mr. Gates, by contrast, lived less ostentatiously. When he wore a suit, he still carried a backpack.

Even as he detailed Mr. Manafort’s financial crimes, Mr. Gates worked in a bit of praise for his former boss.

“Probably one of the most politically brilliant strategists I’ve ever worked with,” he said of Mr. Manafort.

Mr. Gates, 46, pleaded guilty in February to lying to federal authorities and conspiracy to commit fraud, but has yet to be sentenced. Under guidelines that the judge is not required to follow, his plea would result in a prison sentence between four years nine months and six years. The most serious of the 18 felony charges against Mr. Manafort, 69, carry a maximum of 30 years in prison. 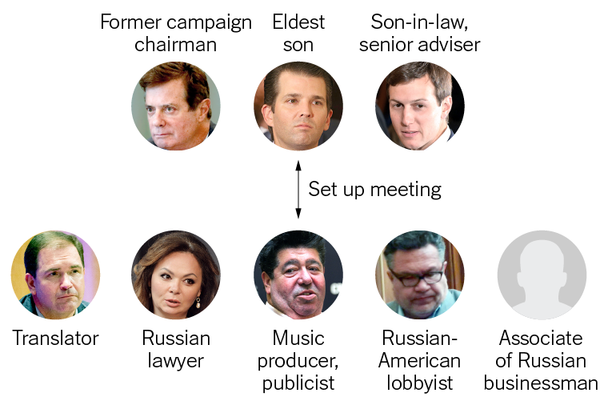 The Russia Meeting at Trump Tower Was to Discuss Adoption. Then It Wasn’t. How Accounts Have Shifted.

The special counsel’s inquiry into the June 2016 meeting is no doubt complicated by the constantly changing explanations from nearly everyone involved.

The prosecutors have tried to punch pre-emptive holes in the notion that Mr. Gates is an untrustworthy turncoat and that Mr. Manafort was a sought-after political consultant who was too busy to notice Mr. Gates was falsifying his financial records. While Mr. Gates was the one who demanded accountants give him copies of financial statements in PDF format so he could convert them to Word and alter them, some of the falsified documents bear Mr. Manafort’s signature.

And Mr. Manafort told the accountants that he had no foreign bank accounts, although prosecutors claim that millions of dollars flowed through his accounts in Cyprus and St. Vincent and the Grenadines. Late last week, out of the jury’s hearing, Judge T.S. Ellis III of the United States District Court in Alexandria said prosecutors had proved both that Mr. Manafort personally denied that those accounts existed and that he controlled them.

Mr. Gates was a religious college student when he entered Mr. Manafort’s orbit in the mid-1990s, accepting an internship as a researcher at a pioneering consulting outfit co-founded by Mr. Manafort that did political and lobbying work for corporations and foreign politicians, including the lottery operator Gtech, the Trump Organization and the Philippine dictator Ferdinand E. Marcos.

Mr. Manafort left the firm the year Mr. Gates arrived. But they continued traveling in the same circles as Mr. Gates impressed remaining partners, whom he occasionally chauffeured between the firm’s Alexandria offices and meetings in Washington.

“Very smart. Good work ethic. He was a guy I thought would go places someday,” said Charlie Black, a co-founder of the firm, who offered Mr. Gates the internship at the recommendation of a friend, and then hired him full-time afterward. “I didn’t know where he would end up, but I always liked him. I still do.”

Mr. Gates joined up with Mr. Manafort in 2006 to help with business ventures in Ukraine that sprang from Mr. Manafort’s work on behalf of Russia-aligned oligarchs and the politicians they supported, including the man Mr. Manafort helped elect president, Viktor F. Yanukovych.

Mr. Manafort provided the connections and signed off on all the big decisions, but it was Mr. Gates who devised much of the strategy and administered the business, according to people who worked with the pair there. They said Mr. Gates did everything from approve expense reimbursements to draft business plans.

That symbiotic relationship carried over to Mr. Trump’s presidential campaign. Neither the campaign nor any potential Russian influence on it was to figure in Mr. Manafort’s trial.

Nonetheless, on Monday, the prosecutors elicited testimony from Mr. Gates and from one of Mr. Manafort’s accountants that tied Mr. Manafort more closely to Russia. The accountant, Cynthia Laporta, testified that in 2006, Mr. Manafort received a $10 million loan from Oleg V. Deripaska, a Russian oligarch close to President Vladimir V. Putin. Ms. Laporta said she saw no evidence it was ever repaid.

And Mr. Gates testified that Konstantin V. Kilimnik, a Russian who prosecutors claim is tied to Russian intelligence, had signatory authority over some of Mr. Manafort’s accounts in Cyprus.

The efforts by Greg D. Andres, the lead prosecutor, to suggest the corrupt nature of Mr. Manafort’s patrons in Ukraine drew another rebuke Monday from Judge Ellis, who has repeatedly tried to curb any reference to why the oligarchs shelled out millions of dollars for Mr. Manafort’s political advice. When Mr. Andres tried to elicit testimony about their backgrounds, the judge urged him, as he has on a daily basis, to “go to the heart of the matter.”

In exasperation, Mr. Andres replied, “Judge, we have been at the heart of the matter.”

University of Nebraska Calls Off Search for Reported Gunman on Campus