Just How Bad Is Partisan Gerrymandering? Ask the Mapmakers

Voters in Gaithersburg, Md., part of the Sixth Congressional District, in 2016. The Supreme Court will hear a gerrymandering case in March that focuses on Maryland.

WASHINGTON — In a big partisan gerrymandering case that will come before the Supreme Court in March, lawyers and judges have already devoted thousands of words to the question of why some of Maryland’s eight congressional districts are so, ah, creatively drawn.

But the best answer by far comes from the man who drew them.

In 2011, Eric Hawkins lugged a laptop loaded with demographic data and a program called Maptitude to Capitol Hill and the offices of the state’s six Democratic House members. Over a series of meetings of which there apparently are no written records, Mr. Hawkins not only crafted new districts for those members, but rerouted the district of 10-term Republican Representative Roscoe Bartlett to make it substantially more challenging for a Republican.

In the first election after the new maps were drawn, Mr. Bartlett failed to muster even 38 percent of the vote. And Maryland Democrats added another House seat to the six they already boasted.

Asked in a deposition last year why the state’s Democratic House members met with him, Mr. Hawkins was refreshingly forthcoming. “They wanted to get re-elected,” he said.

Mr. Hawkins, an analyst for a Washington political consulting firm called NCEC Services Inc., is part of a cottage industry of statisticians, computer jockeys and political sages whose business is to turn demographic data into electoral maps. His firm works exclusively with Democrats; others — like Geographic Strategies, run by the former Republican Party redistricting expert Thomas B. Hofeller — are dog-loyal to Republicans.

By and large, they are political junkies and data nerds. Mr. Hawkins left the University of Colorado in the 1980s to join the doomed presidential campaigns of Senator Gary Hart and Gov. Michael Dukakis of Massachusetts before going into consulting. Mr. Hofeller holds a Ph.D. in government, helped develop the first computerized redistricting system for California’s State Assembly, and has long been the mapmaking éminence grise in the Republican Party.

In the current stew over partisan gerrymandering, few mapmakers are eager to talk about the back-room sausagemaking that occurs when state and congressional political boundaries are redrawn. Much of what they do say, like Mr. Hawkin’s concise reflection on politics, comes from court depositions. And understandably so: To their many detractors, redistricting consultants surface every 10 years, cicada-like, to ravage the landscape of minority parties in state legislatures and Congress. A 2012 magazine article named them “The League of Dangerous Mapmakers.”

But the reality is at least somewhat different. If most mapmakers are unabashedly partisan, their work goes well beyond back-room politics. A good map meets constitutional requirements, such as allotting an equal number of people to every district and respecting racial and ethnic populations. It keeps communities intact rather than splitting them into different jurisdictions; pays attention to rivers and other geographic features that shape jurisdictions. It doesn’t needlessly oust incumbents.

And when one party controls the process, even good maps usually strengthen majority control. The Supreme Court has allowed that some partisanship in redistricting is inevitable; the question in the Maryland case is whether it has run unconstitutionally amok.

In the most egregious partisan gerrymanders, maps generally ignore some or all of those strictures. For their part, mapmakers are quick to point out that their job is to implement political will, not to determine it.

“The person paying the bills drives it,” said Keith Gaddie, a University of Oklahoma political scientist who advised Republicans’ 2011 redistricting of the Wisconsin State Assembly, which was challenged in the Supreme Court last fall. “You can give them caution and counsel, but they’re going to do what they’re going to do.” (Mr. Gaddie and a second scholar filed an amicus brief in the Wisconsin case urging the Supreme Court to rein in gerrymandering.)

Said one Republican consultant, who would speak only on the condition of anonymity: “Some people think I just walk into a legislature with a map and they genuflect to me. That’s not the way it works.”

Indeed, as court records in the Maryland case show, incumbent politicians often make demands of mapmakers that go beyond drawing themselves a safe seat. Representative C.A. “Dutch” Ruppersberg, a Maryland Democrat who served at the time on the House Intelligence Committee, insisted that Fort Meade, the home of the National Security Agency, be part of his turf, according to a deposition of then-Governor Martin O’Malley. Representative Donna Edwards, another Democrat who left office last year, insisted that her district be left untouched — no easy task, as population shifts alone required that new boundaries be drawn. 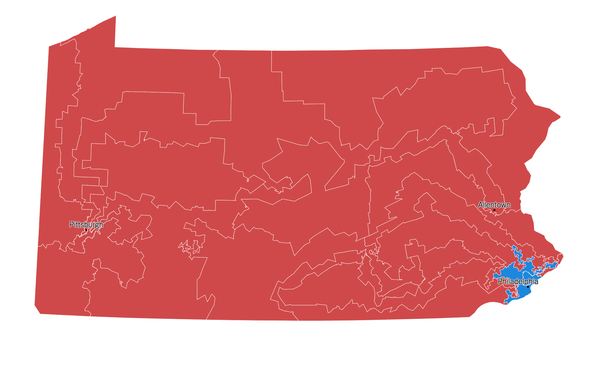 Adventures in Extreme Gerrymandering: See the Fair and Wildly Unfair Maps We Made for Pennsylvania

An exercise in ruthless gerrymandering in a state already known for it.

Besides the Wisconsin and Maryland cases, partisan gerrymanders are under assault in North Carolina and Pennsylvania, where courts invalidated Republican-drawn congressional maps this month. Mr. Hofeller’s firm, Geographic Strategies, drew the North Carolina districts — as in Maryland, according to court depositions, without leaving a paper trail. Pennsylvania relied on legislative staff members to carve up the state’s House districts.

But in all cases, the process is more or less the same. Mapmakers begin with Census Bureau data that marries political boundaries and geographic features like rivers and roads with information on residents’ ages, races and ethnicities. Redistricting software can add custom-tailored political data to the mix, allowing map-drafters to see instantly the partisan impact on a proposed district of adding or removing areas as small as a block.

Kimball W. Brace, whose firm, Election Data Services, mostly assists Democrats, said the basics are little changed from the 1980s, when he used huge paper maps and acetate overlays to create districts in Illinois. Back then, he said, finished map data was entered onto coding sheets by hand, then taken to a local bank whose mainframe would crunch the numbers overnight after it finished clearing checks.

Modern computers have reduced those weeks of work to hours, and both maps and census and political data have become far more accurate, he said. In creating 2011 redistricting maps, Wisconsin Republicans created a composite partisan score for each of the state’s 6,000-plus wards based on the results of statewide elections since 2004. North Carolina used results from as many as 20 state elections; Maryland’s NCEC Services used a regularly updated “Democratic performance index,” a proprietary analysis of the party’s strength in state and federal races.

Redistricting that begins in 2021 is likely to be even more finely tuned, Mr. Brace said, relying on the explosion of marketing and online information that can infer personal preferences down to individual households. “We’re seeing that more and more in campaigns,” he said, “so I think you’ll see people wanting to use it in redistricting.”

While consultants can and sometimes do produce hundreds of suggested maps, most present political leaders with between five and 10 options that can be fine-tuned to meet incumbents’ wishes.

In states where political power is divided, district maps may be politically neutral — or drawn to shield incumbents in both parties. In other states under one-party control, the political marching orders may be more brazen: North Carolina Republicans ordered that no more than three of the state’s 13 House seats be given to Democrats.

Mr. Gaddie, who analyzed the partisan impact of proposed Wisconsin State Assembly maps for the chamber’s Republicans, says partisan gerrymandering has become a threat to the political system because politics has devolved into all-out ideological war, not because of redistricting software or dark-hearted mapmakers. He said he abandoned a sideline as a redistricting adviser and expert witness in redistricting lawsuits after finishing work in Wisconsin.

“I liked working for them in ’02,” he said, “because I’d sit down with a lawyer and they’d say, ‘I like competitive maps. When a map is competitive, we can win on the merits.’ By the time I get around to 2011, they’ve changed. I can’t defend this crap.”

That is not to say that mapmakers are wholly innocent bystanders in the process. “It would be good for the country and politics if partisan gerrymandering ended,” Mark Gersh, the former president of NCEC Services, said in an email this week. But in a subsequent interview, Mr. Gersh stood up for his firm’s work in Maryland and elsewhere.

“I don’t believe in unilateralism,” he said. “If one side does it, the other has to. If that makes me unethical, so be it.”

Maryland’s redistricting was driven by the Democratic governor, Mr. O’Malley, who testified in a deposition that he felt “it was not only my responsibility, but my duty” to saturate Maryland’s Republican-leaning Sixth District with Democratic voters “provided we obeyed the dictates of the law.”

They eventually flipped the Sixth District to Democrats, but only by redrawing other districts, domino-style, to ensure that the loss of Montgomery County voters did not endanger others in the delegation. In the resulting map, the Democratic Third District was so laughably contorted that a federal judge compared it to a “broken-winged pterodactyl, lying prostrate across the center of the state.”

“Incumbent protection,” Mr. Hawkins testified in the Maryland lawsuit last year, “was the major focus of this.”

Asked whether those incumbents included Representative Bartlett, the Republican in the Sixth District, Mr. Hawkins replied, “No.”

Wildfire in Colorado Grows to More Than 700 Acres