The Wailuku River swelled after heavy rainfall from Hurricane Lane on Thursday in Hilo, Hawaii.

Hawaii braced for widespread flooding early Saturday as Hurricane Lane, downgraded a day earlier to a tropical storm as its winds weakened, brought heavy rain to the area.

The National Weather Service warned of more “life-threatening” flash flooding in the archipelago, where the storm had already brought landslides, floods and power failures. Some areas had already seen more than three feet of rain because of the storm. The National Guard was deployed to help with search-and-rescue efforts.

Three fires had broken out in West Maui, possibly caused by downed power lines and most likely stoked by the whipping winds, said Alan Arakawa, the mayor of Maui. By Friday afternoon, two fires were completely contained but still burning, and the third, affecting about 1,500 acres, was about 40 percent contained.

“We were expecting flooding, high winds, big surf — we weren’t expecting very little rain, heavy winds and a big fire,” Mr. Arakawa said. “We’re hoping for just enough rain to put out the fires, not enough rain to have mudslides after that.”

But officials caught a break amid the chaos: On Friday, the National Weather Service downgraded Lane to a tropical storm, a significant downshift from the Category 3 hurricane it was just 24 hours earlier.

The storm, which was traveling only a few miles per hour, was expected to continue weakening. But the agency warned that the tropical storm would continue to pose a risk for flooding and could still hurl winds of up to 70 m.p.h.

“We dodged a bullet,” Mayor Kirk Caldwell of Honolulu said at a news conference. But he added that “doesn’t mean it’s over.”

“We’re going to have rain and wind and local flooding — and we need to be vigilant,” he said.

Between the storm’s lumbering speed and Hawaii’s countless microclimates, it was difficult to predict would happen on Saturday. Forecasters warned that the storm was still dangerous, and island residents and visitors, surrounded by thousands of miles of ocean, were mostly stuck to watch and wait.

“You go to higher ground, hunker down with stored water and canned food, because there’s nowhere else to escape,” said Ron Matayoshi, a volunteer at the McKinley High School emergency evacuation center in urban Honolulu. 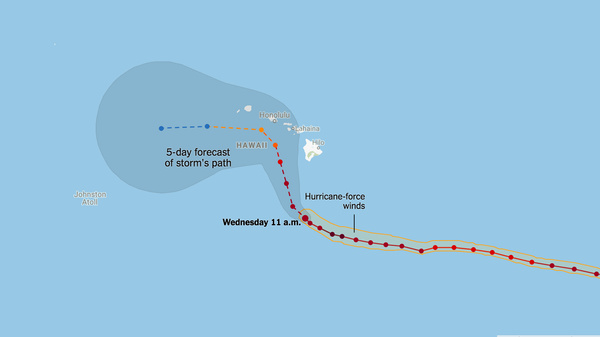 By Friday morning, Hurricane Lane had weakened to a Category 2 storm, but the storm continued to dump heavy rainfall on parts of Hawaii.

Gov. David Ige said he had received a phone call on Friday from President Trump, who pledged the support of federal agencies to help the state.

Forecasters expected the storm to keep moving north before making a westward turn on Saturday.

Alison Nugent, an assistant professor of atmospheric sciences at the University of Hawaii at Manoa, said the storm was losing strength as the wind shear, which typically weakens hurricanes before they get to Hawaii, finally showed up.

But even a weak hurricane could be unpredictable and destructive, Professor Nugent explained, because of the way storms interact with Hawaii’s mountainous and varied topography. Wind can speed up as it flows down a mountainside or through the gaps between the islands. And moist air produces more rain when it hits the side of a mountain.

Tropical Storm Lane’s slow speed meant that it was likely to dump large amounts of rain. Lingering hurricanes can cause devastating flooding and billions of dollars of damage, as Texans learned last year when Hurricane Harvey stalled over the state.

Professor Nugent said she had considered fleeing the state, but by the time she looked at ticket prices earlier this week, flights were too expensive. On Friday, airports were open but there were delays and cancellations across the state. American Airlines canceled flights in and out of Kahului. Hawaiian Airlines said that some West Coast to Maui flights were delayed and that some inter-island flights were canceled.

Nearly all of Hawaii’s commodities come through a harbor in Honolulu, which has been closed by the United States Coast Guard, said Maj. Gen. Arthur J. Logan, director of the Hawaii Emergency Management Agency. But he said locals need not worry about running out of food and supplies: Full containers were ready to be moved and ships were on call to be deployed when the harbor reopens.

Throughout Friday, it was as if different islands of Hawaii were experiencing different storms.

On the Island of Hawaii, torrential rain continued. At one point, Saddle Road, the main east-to-west thoroughfare on the island, was blocked by a landslide. The city of Hilo and other parts of the island’s east side were on their third day of flash-flood alerts, and Rainbow Falls, which is usually a peaceful place, was gushing rivers of brown water. Five tourists from California were rescued from a flooded vacation home in Hilo on Thursday, according to The Associated Press.

It all meant that Randy Bruner’s driveway in Pahoa, on Hawaii Island, looked like a rushing creek. “When it’s pouring down rain, there’s a river running through where I live,” Mr. Bruner said.

On Maui, the fires left one woman burned and in need of an air evacuation to Oahu. Officials said more than 900 people were taking shelter in the county, although at one point, a hurricane shelter had to be evacuated because of flames in the area.

Victoria Monroe, a tourist from Orange County, Calif., was sheltering in place at the Marriott’s Maui Ocean Club in Lahaina, with a view of two of the fires.

“It was at the top of the hill and it went all the way down toward the ocean,” Ms. Monroe said of one fire. “I thought it was a volcano erupting.”

Her vacation was alternating between hellish and picturesque. “It’s still really pretty out here,” she said, hours before an alert in her hotel instructed people to go inside because of “dust storms.”

And on the Island of Kauai, residents were still waiting for the winds to pick up, anxious that the storm could lead to a repeat of the flooding that devastated part of the island in April. Those floods breached a major highway in four places, closing it to all but local resident traffic. Tourists were banned.

“We’ve been through so many disasters that you have to love it or leave it,” said Teri Tico, a lawyer who lives on the beach in Haena but left ahead of the storm.

Mike Kuntz, a Haena resident who is staying put, said he had to console his daughter as the storm approached. “I want to get out of here,” he recalled her saying, “but I have nowhere to go.”

US corn reserves expected to fall to 15-year low