Robert E. Murray, chief executive of the largest coal mining company in the United States, at a Clean Power Plan hearing in Charleston, W.Va., in November.

Want the latest climate news in your inbox? You can sign up here to receive Climate Fwd:, our new email newsletter.

WASHINGTON — President Trump’s first year in office has been a boon for the coal industry, with the Trump administration rolling back regulations on coal-fired power plants and withdrawing the United States from the Paris climate change agreement.

Environmentalists have expressed alarm at the new direction, and have complained that Mr. Trump was following a blueprint from the coal industry. A confidential memo written by the head of the country’s largest coal mining company suggests they might not be wrong.

The memo was written by Robert E. Murray, a longtime Trump supporter who donated $300,000 to the president’s inauguration. In it, Mr. Murray, the head of Murray Energy, presented Mr. Trump with a wish list of environmental rollbacks just weeks after the inauguration. 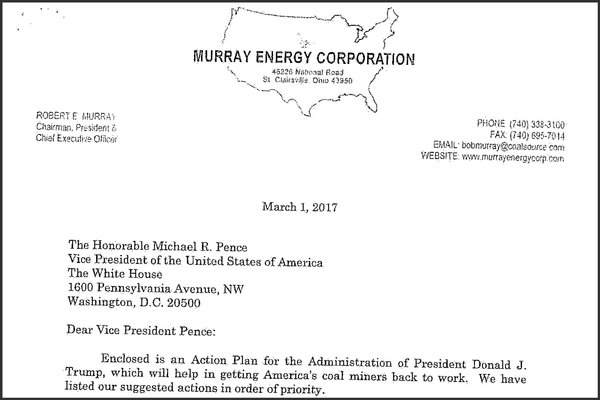 Nearly a year later, the White House and federal agencies have completed or are on track to fulfill most of the 16 detailed requests, even with Monday’s decision by federal regulators to reject a proposal by Energy Secretary Rick Perry to subsidize struggling coal and nuclear plants.

The March 1 memo, which was obtained by Senator Sheldon Whitehouse of Rhode Island and shared with The New York Times, is addressed to Vice President Mike Pence. The sweeping wish list of regulatory overhauls includes ending regulations on greenhouse gas emissions and ozone and mine safety, as well as cutting the staff of the Environmental Protection Agency “at least in half” and overhauling the Labor Department’s office of mine safety.

“I give President Trump and his administration credit for being bold, being passionate and being correct in addressing a lot of these issues that were on my list here,” Mr. Murray said in an interview Tuesday.

Photographs of portions of a different memo, dated March 23 and addressed to Rick Perry, the secretary of the Department of Energy, were obtained by the magazine In These Times last year. They were taken during a meeting Mr. Murray held on March 29 with Mr. Perry and others at the Energy Department, according to the magazine.

Mr. Murray on Tuesday described the memos as very similar.

The March 1 “Action Plan for the Administration of President Donald J. Trump” is aimed, Mr. Murray wrote in the memo, at “getting America’s coal miners back to work.” He also asks the federal government to cut funding for carbon capture and sequestration technology — which Mr. Murray called “a pseudonym for ‘no coal’” — and eliminate a 2009 E.P.A. ruling known as the endangerment finding that was the legal justification for much of the Obama administration’s climate change policy.

“This list was to remain private, a list of things that needed to be done for reliable, low-cost electricity in America. That was my number one goal here, was to give guidance to the administration in an area that I have observed over 60 years,” Mr. Murray said.

Critics say Mr. Murray’s list and the apparent ease with which he was able to get it in front of cabinet officials and others illustrates the open-door access the Trump administration has offered energy and other industries as it moves to redirect and weaken federal regulations.

“The astonishing presumption of this list,” Mr. Whitehouse, a Democrat, said. “It’s an extraordinary arrogance of the fossil fuel industry based on the power they wield in Washington, D.C.” He said even though Mr. Murray had bragged about the action plan on a Frontline documentary last year, the Energy Department had declined his requests to immediately release the memo.

“The power of the fossil fuel industry around here is so great I think the industry feels they can count on simply not complying with requests,” Mr. Whitehouse said.

The Energy Department did not respond to a request to discuss the memos from Mr. Murray.

The Trump administration has had an unusually close relationship with Mr. Murray. He and 10 of his miners were invited to watch the president sign an executive order to rollback President Obama’s climate change regulations. He has met with Mr. Perry to discuss the needs of coal producers. His longtime attorney, Andrew Wheeler, is awaiting Senate confirmation to the No. 2 slot at the E.P.A., and David Zatezalo, the nation’s new top mine safety and health regulator and previously the president of a coal mining company, told his hometown paper that Mr. Murray had encouraged him to put his hat in the ring for the job.

“I really don’t think it’s at all unusual that Murray would have this wish list or a set of recommendations. What makes it different is that it’s pretty clear that he has a personal relationship with the president,” Mr. Holmstead said. “It seems like given Mr. Murray’s relationship with the president that he had more of an expectation that these things were going to be accepted or implemented.”

Climate Change Is Complex. We’ve Got Answers to Your Questions.

We know. Global warming is daunting. So here’s a place to start: 17 often-asked questions with some straightforward answers.

Environmental groups have accused Mr. Murray of directly asking Mr. Perry for a proposed rule to reward coal and nuclear power plants for providing “grid resiliency.” The March 1 memo does not mention the grid, though photographs of the cover page of the March 23 document to Mr. Perry obtained by In These Times shows its focus is “a plan for achieving reliable and low cost electricity.”

Soon after Mr. Murray’s meeting at D.O.E., Mr. Perry ordered the agency to prepare a study on the country’s electric grid reliability, a precursor to ordering the federal government to subsidize struggling coal and nuclear plants.

Mr. Murray and a spokesman, Gary Broadbent, said the difference between the two memos was that the one provided to Mr. Perry asked the Energy Department to study the security of the nation’s power grid.

“I suggested that the study be made,” Mr. Murray said. “What they did from there, the administration did. I did not have involvement in it.”

One of the items on the 16-point list was an overhaul of FERC regulators, and the Trump administration accomplished that. But those Trump-appointed commissioners voted against the plan to bail out coal and nuclear.

“Obviously they forgot who appointed them right out of the box,” Mr. Murray said.

A Science Denier at the Natural History Museum? Scientists Rebel

Climate Change Brought a Lobster Boom. Now It Could Cause a Bust.

Climate Change Is Driving People From Home. So Why Don’t They Count as Refugees?