The launch of the Chang’e 4 lunar probe in December. It has reached the far side of the moon, but some Chinese question whether the money was well spent.

BEIJING — Hours after a space probe from China made humanity’s first landing on the far side of the moon, sending images of its surroundings back to Earth, the spacecraft deployed a rover on Thursday to take still more photographs and scan the surface of terrain never before traversed.

The rover, weighing 300 pounds, rolled off a ramp on the lander at 10:22 p.m. Beijing time, laying deep tracks in the moon’s soft soil, its solar panels spread like wings, according to a photograph released to state media. The rover is now programmed to roam across a barren vista toward a distinct crater.

Chinese scientists hailed the landing of the Chang’e-4 probe as evidence of the country’s growing stature in space exploration. “It is human nature to explore the unknown world,” Wu Weiren, chief designer of the lunar mission for the China National Space Administration, said in an interview on the state television network, CCTV. “And it is what our generation and the next generation are supposed to do.”

Compared with previous missions, however, the reaction to Thursday’s milestones seemed strikingly restrained, both in the country’s state-run news outlets and on social media. On China’s most-watched TV news program early Thursday evening, the landing — declared a success by officials at mission control — was not even one of the four top stories.

The doodle of China’s biggest search engine, Baidu, paid subtle homage to the lander and its rover, but the news was relegated to the fifth item on CCTV’s 7 p.m. news program. It followed three reports on the doings of the country’s leader, Xi Jinping, and an item on a new government zone being developed outside Beijing. In interviews, several people said they had paid little attention to the moon landing. 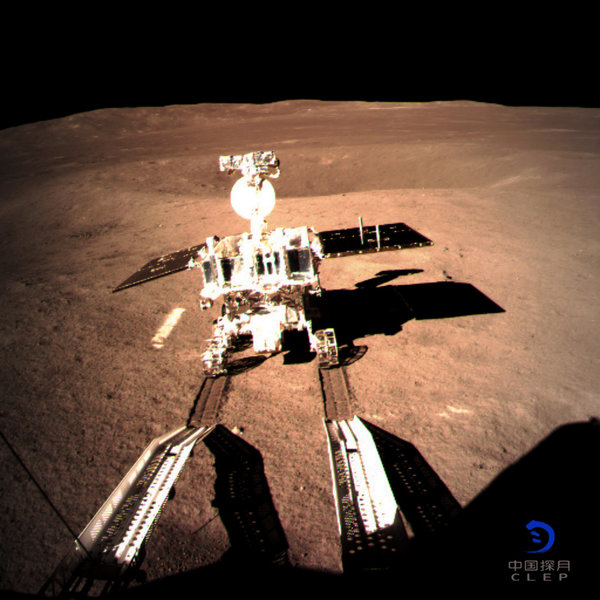 China’s Chang’e-4 became the first spacecraft to make a soft landing on the far side of the moon.

[Why China’s moon landing was hailed a ‘new chapter in humanity’s exploration of the moon.’]

The muted reaction was a sign that the novelty of the country’s space missions has faded. But the coverage also appeared to reflect political and economic anxieties at a time when Mr. Xi’s government is trying to negotiate a truce in the trade war with the United States and respond to worrisome cracks in the economy.

A woman in a cafe in Beijing, Liu Ying, expressed pride in the space program but said she had not followed the landing closely. She then expressed wonder about the costs. “The economy is bad,” she said. “Is it really a good thing for the country to spend recklessly?”

The government does not disclose how much it spends on its space programs, but it has made it clear that this launch was part of an ambitious goal to establish China as one of the world’s space powers, rivaling the United States. Officials have said the country hopes to establish a lunar base that could provide natural resources for the Earth but also serve as a launching pad for further exploration.

The first of three photographs sent by Chang’e-4 appeared a little over an hour after the spacecraft touched down as planned at 10:26 a.m., Beijing time, in the middle of a crater not far from the moon’s south pole. It showed a barren, undulating vista pocked by a smaller crater, as did another picture sent 12 hours later as the rover began its journey.

Contrary to the enduring but mistaken notion that the moon has a “dark side” — you can blame Pink Floyd for that, at least in part — the photographs showed the landscape bathed in an orange hue, casting the sharp shadows from the lander and the rover. The other two, in black and white, showed the lander descending.

The spacecraft was the first to land intact on the side of the moon that perpetually faces away from Earth. A Soviet satellite took the first photographs of the far side in 1959, and the Apollo missions circled above it between 1968 and 1972, but the difficulty of communicating with earthbound scientists had always made the idea of landing there more complex, if not necessarily prohibitive.

Dr. Wu, in his televised remarks, said the landing had been a “great kickoff” for future lunar missions, including ones intended to land astronauts — something only the United States has accomplished, sending 12 men to the moon. Under the current schedule, China would send the first astronaut by 2030.

“We are building China into a space giant,” he said.

To overcome the challenge of communicating from the moon’s far side, China had previously launched a satellite called Queqiao, or Magpie Bridge. It now orbits beyond the moon to act as a relay for transmissions to and from the mission control center on the northwestern outskirts of Beijing.

China’s first lunar probe, known as Chang’e-3, landed on the near side of the moon in 2013. It also released a rover, but it was hindered by terrain and communication problems. After a month it came to a halt, and broadcast only intermittently following that.

Yu Guobin, a spokesman for the Chang’e-4 program, said in televised remarks that the detachment of the rover was the “more important historical moment.”

NASA’s administrator, Jim Bridenstine, congratulated his Chinese counterparts for the successful landing. In a message on Twitter, he called the mission “a first for humanity and an impressive accomplishment!” Twitter is banned inside China’s Great Firewall, but his remark was widely quoted nonetheless.

Mahmoud Abbas: Out to Push Palestinian Cause Back to Top of Agenda

Their Road to Turkey Was Long and Grueling, but the Short Flight Home Was Crueler