A freeway in Los Angeles. “This is about health, it’s about life and death,” Gov. Jerry Brown of California said of the state’s lawsuit.

A coalition led by California sued the Trump administration over car emissions rules on Tuesday, escalating a revolt against a proposed rollback of fuel economy standards that threatens to split the country’s auto market.

In a lawsuit filed in the United States Court of Appeals for the District of Columbia, California and its coalition — 16 other states and the District of Columbia — called the Environmental Protection Agency’s effort to weaken auto emissions rules unlawful and accused the agency of failing to follow its own regulations, and of violating the Clean Air Act.

“States representing 140 million Americans are getting together to sue Outlaw Pruitt — not Administrator Pruitt, but Outlaw Pruitt,” Gov. Jerry Brown of California said at a news conference, referring to Scott Pruitt, the head of the Environmental Protection Agency.

“This is about health, it’s about life and death,” Governor Brown said. “I’m going to fight it with everything I can.”

Tuesday’s lawsuit represents an important step in a brewing battle between the state and the Trump administration over climate change regulations. That battle could break into war in the coming weeks if the E.P.A. moves to substantially weaken the nation’s current greenhouse gas rules for tailpipe emissions or challenges a legal waiver that allows California to set its own greenhouse gas emissions regulations.

It is not yet clear if the E.P.A. will take those steps, but Tuesday’s lawsuit could strengthen California’s legal hand if that were to happen.

“This is a preliminary challenge. It’s a shot across the bow,” said Jody Freeman, a professor of environmental law at Harvard University who advised the Obama administration.“It sets the table to challenge the agency’s reasons for rolling back the rule, if they go ahead and do it.”

California has long been authorized under the 1970 Clean Air Act to write its own stricter air pollution rules, and a dozen other states have traditionally followed those standards, which are designed to curb earth-warming emissions from cars and light trucks. 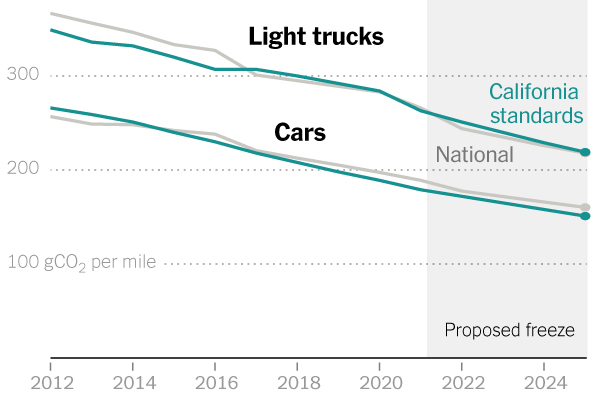 California Is Ready for a Fight Over Tailpipe Emissions. Here’s Why.

California officials have said they will fight in court any attempt by the Trump administration to revoke or bypass their power to set their own auto emissions standards. Here are three big issues for the state.

But last spring, executives from the Big Three automakers went to the White House to ask for more lenient emissions rules, kicking off an effort by the administration to roll back those standards.

Last month, the Trump administration moved forward legally with a plan to reopen the Obama administration’s standards, saying they were too stringent. The E.P.A. has not yet put forth a proposed set of new standards to replace the Obama rules, but it has drafted a new set of regulations that would drastically weaken the Obama-era rules after 2020.

California had said it would stick with the tougher regulations and threatened to sue should Washington try to challenge its authority to follow its own air pollution rules.

“This is California saying: You really want war? We’ll give you war,” said Dan Becker, director of the Safe Climate Campaign, an advocate for stronger emissions rules. “It’s a signal to the administration that they’re not going to get away with anything in this space.”

A legal battle with California brings the nation’s auto industry closer to a split into two markets as its legal challenge plays out in court: one that continues to follow stricter rules requiring cars to be more efficient and less polluting than the other.

Automakers are scrambling to avoid that outcome, urging continued talks for a unified national program. They have asked for a direct meeting with President Trump to try to avert an all-out weakening of regulations that they fear will now go well beyond what they themselves initially sought, according to two people with knowledge of the automakers’ plans.

Separately, Senator Tom Carper of Delaware, the top Democrat on the Environment and Public Works Committee, sent a letter to the secretary of the Department of Transportation, Elaine Chao, and Mr. Pruitt asking that they abandon the rollback.

“Such a proposal, if finalized, would harm U.S. national and economic security, undermine efforts to combat global warming pollution, create regulatory and manufacturing uncertainty for the automobile industry and unnecessary litigation, increase the amount of gasoline consumers would have to buy, and runs counter to statements that both of you have made,” Senator Carper wrote. “I urge you to immediately disavow this proposal.”

Antarctica Is Melting Three Times as Fast as a Decade Ago