Butter Tarts, Canada’s Humble Favorite, Have Much to Love

The butter tart is Canada’s gift to the dessert canon. Here, a tart at Don’s Bakery in Barrie, Ontario.

You could be forgiven if you’ve never eaten a butter tart. There is no flashy frosting or elaborate lattice to entice you. It’s easy to pass by.

But Canadians will tell you that these diminutive treats hold an expanse of flavor and textures: flaky pastry, caramelized crust and a bracingly sweet filling.

The butter tart is celebrated in its homeland, where the preference for runny or firm fillings, plain or with raisins, is a matter of passionate national debate. Ontario, where most scholars believe the butter tart was born, celebrates it with two dueling tourism trails (Kawarthas Northumberland Butter Tart Tour and Butter Tarts and Buggies) and festivals galore, including Ontario’s Best Butter Tart Festival in Midland and a new one that will have its debut in March in Bowmanville, east of Toronto.

“If you look at the ingredients, it’s really what you have in your pantry when you have nothing else,” said Liz Driver, the author of “Culinary Landmarks: A Bibliography of Canadian Cookbooks, 1825–1949.”

At its most basic, the butter tart is a pastry filled with brown sugar, butter and egg. Oven alchemy transforms those simple ingredients into something spectacular. Inventive cooks have gone further with chocolate chips, coconut, nuts and other add-ins.

Unlike the Nanaimo bar — a midcentury British Columbian creation made with processed ingredients like custard powder and graham crackers — the butter tart goes back at least to the 19th century. 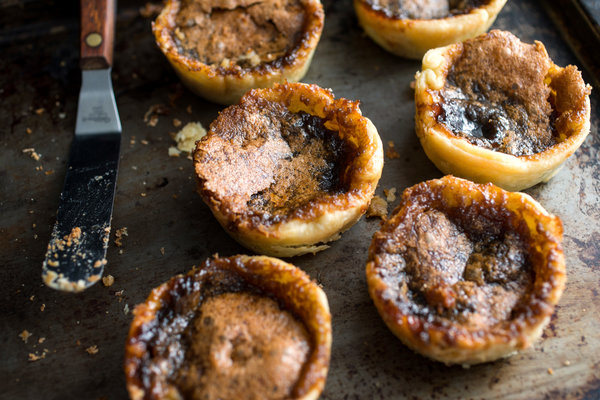 A celebration of Canadian cuisine, from its indigenous chefs to its famous butter tarts and Caesars.

Mary F. Williamson, a retired fine arts librarian at York University in Toronto, traced the earliest mention to 1900 and the “Royal Victoria Cook Book,” published to raise money for the Royal Victoria Hospital in Barrie, Ontario. Margaret MacLeod’s recipe for “Filling for Tarts” (like some of the other community cookbook contributors, she was identified by her husband’s name, Mrs. Malcolm MacLeod) called for one cup of sugar, a half-cup butter, two eggs and a cup of currants.

There are as many theories about the origins of the tart as there are variations. The brown sugar pie, the Scottish border tart, Bakewell tarts and the Quebec sugar pie — each has been named a predecessor to the Canadian tart.

“Each of those things is their very own particular thing, very similar to each other, but they’re not all the same,” Ms. Driver said.

The very first butter tart recipe may never be found, because until recently cookbooks were not seen as items worth preserving.

“Most of these things were developed by housewives, and it wasn’t deemed important,” said Lenore Newman, the author of “Speaking in Cod Tongues: A Canadian Culinary Journey.” “Now that we’re actually interested in it, we go back, and we find there are a lot of holes in this knowledge. I think we can safely say they’re Canadian and that they’re definitely still popular.”

By the 1910s, the butter tart was all the rage in the farming regions of Ontario. Three recipes for tart filling and six recipes for butter tarts appear in the “Canadian Farm Cook Book” of 1911. “Junia,” a columnist for The Farmer’s Advocate, shared reader recipes in early 1913 to answer a question from N.W. of Ontario who longed for a butter tart recipe — “the crust and all, as I am a new beginner.” Readers responded with tart recipes plain and with currants, proof perhaps that the filling debate over plain or dried fruit is more than a century old.

That same year, the Lake of the Woods Milling Company published “Five Roses Cook Book,” with recipes from its customers; it spread the butter tart across the Dominion. At one point, there was one “Five Roses” cookbook for every four Canadian households, said Ms. Driver, the bibliographer.

By midcentury, Eaton’s department store in Toronto included a butter tart in its boxed picnic lunches, and Canadian Betty Crockers like Edith Adams (the fictional home economist of The Vancouver Sun) and Rita Martin (also fictional, with a name pronounceable in French and English) evangelized the tart, along with real-life home economists like Kate Aitken.

Loyalties to local favorites are fierce. In the 70 years since Don Lloyd opened his seasonal bakery in Bala, Ontario, the location has moved once, and ownership has flipped five times, but the butter tart recipe has never changed.

“People that used to come to Don’s in the ’50s remember that same taste, so that’s something we’re not messing around with,” said Jana Foster, who bought the bakery in Muskoka with her husband, Bryan, in 2010.

At Don’s, bakers crank out tarts, molding pastry dough into individual tins with an ancient hand-operated tart press that was brought over from Birmingham, England. Butter tarts — in plain, raisin or cranberry — are among the most popular items sold by the bakery during the May-to-October season. Last year, it sold 42,000 tarts alone. In September, the Fosters opened an outpost (with a modern tart press) in Barrie to keep up with year-round demand.

Elizabeth Baird, who was food editor of the magazine from 1987 to 2009, was a student at the University of Toronto when she realized the power of their appeal.

“I worked in a summer lodge where there were a lot of American visitors, and we could wow them every time with butter tarts with vanilla ice cream,” Ms. Baird said. “I think that was the first time I realized they were unique to Canada.”

Why, then, have the tarts never made significant waves south of the border? It could be that Canadians don’t want to let the world — or just their louder neighbors — in on their sweetest secret.

“You have so many things of your own,” Ms. Driver said with a laugh. “You don’t need a Canadian butter tart.”

Does your family have a favorite butter tart recipe or variation? Share it with us for an upcoming story. Email foodeditors@nytimes.com.

Home to Hawaii in Search of Poke

A Satisfying Soup From the Italian Pantry

The Secret to Perfect Popcorn Is Already in Your Cupboard

Bring Your Lunch to Work

A Good Muffin Doesn’t Have to Be Bad for You