Andrew Gillum, the mayor of Tallahassee, is an outspoken progressive.

ORLANDO, Fla. — Florida Democrats nominated Andrew Gillum, the Tallahassee mayor, and Republicans tapped Representative Ron DeSantis for governor Tuesday, setting the stage for a ferocious general election in the country’s largest swing state between one of President Trump’s most unabashed allies and an outspoken progressive who would be Florida’s first black governor.

Mr. Gillum’s narrow defeat of the former congresswoman Gwen Graham, the front-runner, represented one of the most significant upsets of the primary season and a major victory for the liberal wing of the Democratic Party. It sets up twin governors’ races in neighboring Southern states between left-leaning African-Americans banking on the region’s new, diversifying electorate, and ardent, Trump-style nationalists.

Georgia’s Democratic candidate, Stacey Abrams, will now be joined by Mr. Gillum, while its Republican candidate, the secretary of state Brian Kemp, has a mirror to the south in Mr. DeSantis.

And here, with redistricting looming after the next census, Medicaid expansion on the line and control of the most crucial presidential battleground at stake, the Florida governor’s race is shaping up to be a titanic showdown. The specter of two young, hard-charging politicians who represent the beating heart of their parties facing off will supercharge the fall campaign.

“We’re going to make clear to the rest of the world that the dark days that we’ve been under, coming out of Washington, that the derision and the division that has been coming out of our White House, that right here in the state of Florida we are going to remind this nation of what is truly the American way,” Mr. Gillum told jubilant supporters in Tallahassee.

In Arizona, Republican primary voters chose the establishment favorite, Representative Martha McSally, to replace Mr. Trump’s most outspoken G.O.P. critic in the Senate, Jeff Flake, in a contest that evolved into a test of which candidate could embrace Mr. Trump most snugly. In the Arizona governor’s primary, Democrats again chose an outspoken progressive over a pragmatist.

Lifted by a June endorsement from Mr. Trump, Mr. DeSantis overwhelmed Adam Putnam, the state agriculture commissioner and one-time favorite for the nomination, taking 57 percent of the vote to Mr. Putnam’s 37 percent with all precincts reporting, according to The Associated Press.

But the surprise of the night was Mr. Gillum’s victory over Ms. Graham, the daughter of governor-turned-senator Bob Graham. Propelled by an endorsement from Senator Bernie Sanders and financing from Tom Steyer, George Soros and Collective PAC, a group dedicated to electing African-Americans, the 39-year-old mayor surged at the end of the campaign to upset Ms. Graham, the establishment pick. 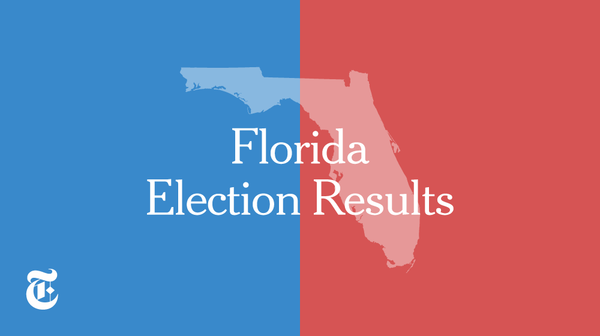 See full results and maps from the Florida primaries.

With 100 percent of precincts reporting, Mr. Gillum won 34 percent of the vote while Ms. Graham had 31 percent, The A.P. reported.

“My opponents have spent, together, over $90 million in this race. We have spent four” million, he said. “Money doesn’t vote. People do.”

Mr. Gillum edged out Ms. Graham, a former North Florida congresswoman who finished second, and Mr. Levine, the former Miami Beach mayor who finished third after dropping nearly $30 million of his personal fortune into the campaign. Ms. Graham, a moderate, had been considered the favorite in a midterm year in which many Democratic women have fared well.

But her centrism and the implicit case for electability proved to be of little asset in a year when emotions have gripped both parties.

In the final weeks of the election, Mr. Gillum aired an ad trumpeting his support for universal health care, legalizing marijuana and abolishing the Immigration and Customs Enforcement agency. He is also a vocal advocate of impeaching Mr. Trump.

Addressing supporters at her election night party at a bar in downtown Orlando just before 10 p.m., Ms. Graham called Mr. Gillum a friend before, during and after the campaign.

“I said, ‘Now, Andrew, go out and win this damn thing,’” she said. “Because this is too important.”

Mr. Gillum’s unexpected nomination represents a sharp break with recent Florida midterm elections, in which Democratic voters nominated somewhat bland moderates to try to win in a purple state. Instead, they lost over and over again: Democrats have not held the Florida governor’s mansion in two decades, and they lost the past two governor’s elections by a single percentage point.

Mr. Gillum argued Democrats needed to back a progressive who could expand the electorate by attracting more black, Latino and millennial voters who might otherwise sit out the midterm.

“We’re showing that we can bring together the Bernie Sanders wing of the party and the Hillary Clinton wing of the party,” he said in a recent interview. Democrats cannot win, he added, by “trying to be Republican-lite.”

Florida Democrats have long considered Mr. Gillum a rising star in a state party with few of them. He was elected to the city commission while still a student at Florida A&M University, and he spoke at the 2016 Democratic National Convention in Philadelphia.

But only in the last few weeks of the governor’s race did Mr. Gillum start looking like a serious contender. Early on, he struggled to raise serious money, as donors worried about an F.B.I. investigation into City Hall corruption — an inquiry that Mr. DeSantis wasted no time in raising Tuesday night. “He’s embroiled in corruption scandals,” he said. “This guy can’t even run the city of Tallahassee.”

The mayor, who has said he is not the investigation’s target, consistently placed fourth out of five in public polls, despite outperforming his opponents in debates with his charisma on stage and grass-roots support in the audience.

His poor showing in surveys, however, kept his rivals from attacking him, allowing Mr. Gillum to move up unscathed by the pointed television attacks that engulfed Ms. Graham, Mr. Levine and Mr. Greene, a billionaire Palm Beach real estate investor who spent nearly $40 million but finished fourth.

Mr. DeSantis’s victory represented another emphatic demonstration of the president’s iron grip on the Republican Party. Mr. DeSantis steadily gained notoriety on the right, and attention in the Oval Office, last year by frequently appearing on Fox News to defend Mr. Trump.

The president took notice of Mr. DeSantis, a Navy veteran, and praised his candidacy last December. Mr. Trump’s near-endorsement prompted a flurry of lobbying by Republicans urging him to refrain from offering his formal blessing. And among the party officials counseling restraint was Vice President Mike Pence, who served with Mr. Putnam in the House.

But Mr. Trump was grateful for Mr. DeSantis’s televised advocacy, believed the former JAG officer looked the part of a governor and had little relationship with Mr. Putnam. In June, Mr. Trump offered, as he put it on Twitter, his “full Endorsement.”

Recounting his intervention in the Florida race last week at a rally last week in West Virginia, Mr. Trump said of Mr. DeSantis: “He was at three, and I gave him a nice shot, and a nice little tweet — bing bing — and he went from three to like 20 something.”

Mr. DeSantis was almost certainly winning more than 3 percent of the vote when Mr. Trump weighed in, but there is little doubt that the president’s support dramatically reshaped the race.

Mr. DeSantis trumpeted the endorsement in his advertising and basked in the president’s praise when they stood together on stage in Tampa in late July.

Mr. Putnam fought back, emphasizing his deep knowledge of Florida and chiding Mr. DeSantis for his television ubiquity. The son of a citrus farming family who was elected to the State Legislature when he was 22, he went on to serve in the House leadership in Washington.

Her Republican opponent will be Maria Elvira Salazar, a former Spanish-language television journalist who on Tuesday bested a crowded field, including a rival who said as a child she went up on a spaceship with aliens. Democrats are expected to pick up the liberal-leaning seat, which is currently held by Representative Ileana Ros-Lehtinen, a veteran Republican who is retiring.

In Orlando, Representative Darren Soto, the first Puerto Rican elected to Congress from Florida, fended off a Democratic primary challenge from former Representative Alan Grayson, a liberal firebrand who has struggled in his attempt to return to Washington.

[A Parkland parent won election to the school board.]

In Arizona, just three days after the death of Senator John McCain, Republicans demonstrated how much the party had drifted from Mr. McCain’s pragmatic style of politics to Mr. Trump’s hard-line nationalism.

After asking the president to stay out of the race, Ms. McSally, who would not say how she voted in 2016, sought Mr. Trump’s endorsement earlier this month.

Ms. McSally, one of the first women to fly in combat for the Air Force, handily beat two far-right conservatives who divided that part of the electorate: the former Maricopa County sheriff, Joe Arpaio, whom Mr. Trump pardoned last year, and Kelli Ward, a former state senator who garnered nearly 40 percent in a 2016 primary against Mr. McCain and sought to capitalize on his death Monday by saying “political correctness is like a cancer.”

Ms. McSally will now take on the Democratic primary victor, Representative Kyrsten Sinema, in a contest that could help decide control of the Senate.

Speaking to supporters, Ms. McSally called for a moment of silence for Mr. McCain, but then quickly targeted Ms. Sinema. “It’s a choice between a doer and a talker, between a patriot and a protester,” Ms. McSally said.

Ms. Sinema also bowed to Mr. McCain and placed herself in his tradition of “always putting country over party,” saying that Arizonans need “an independent voice” in the Senate.

In the governor’s race there, David Garcia, a liberal Democrat, defeated his centrist opponent, Steve Farley, to take on Gov. Doug Ducey, a Republican who may be vulnerable in November.

Mr. Garcia, a former executive at the State Education Department, has sought to rally progressives, urging them to “imagine no wall in southern Arizona.” Mr. Farley argued that Democrats can win in a red-tinted state only by presenting themselves as pragmatists.

In Oklahoma, Republicans nominated the Tulsa business executive Kevin Stitt in the runoff for governor, spurning former Mayor Mick Cornett of Oklahoma City, who was attacked as being insufficiently supportive of Mr. Trump. With Gov. Mary Fallin, the Republican lame duck, leaving office with dismal approval ratings, Democrats believe they could be competitive in what is generally a deeply conservative state.